This was a spur of the moment thing for my daughters on Valentine's day morning. I was babysitting my two year old's best friend that morning as well and I realised that although we had a load of barbie dolls (from garage sales) and some lovely clothes for them (that replaced the home made no sew ones from a while back. Thank you Shannon!) and even two barbie cars (from Savers and Goodwill), there was no place for them to hang out, so a barbie ranch was the plan (sounds like Hugh Heffner's summer house right?).

I used two large sheets of cardboard left in the garage, that I'd whipped out from between the layers of toilet rolls at Costco. Below you can see the shape that I cut out of the first piece to make the narrow roofed end of the house. 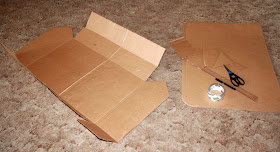 The second sheet was just bent in half and slotted into the first piece. Once they were scotch taped together I cut out some windows and a door. My four year old had fun measuring the cardboard with me and wanted to carry on measuring bits of the house once it was made. 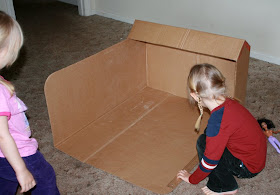 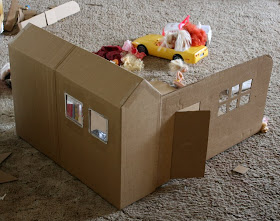 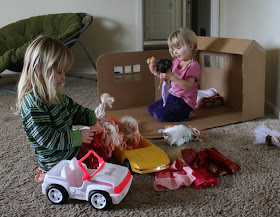 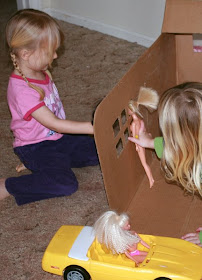 The girls played with the house for most of the morning and I had time to make them some lame furniture out of other cardboard boxes in the recycling bin. barbie had a Cheezits box bed, a butter box chair and a ritz cracker type box bath to wash her two little girls in. 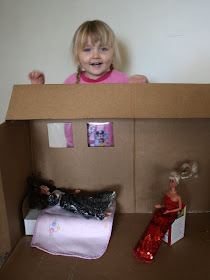 Yes, I always bath my children whilst wearing my most mahoosive ball gown. 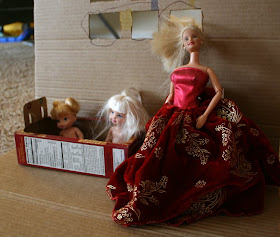 I was totally planning on painting it white and letting the kids decorate it, but it only lasted for a couple of days before I had a load of kids around and it got inadvertently trampled. I'll probably make another one for them at some point though because it was very quick to do and maybe some more substantial furniture while I'm at it.
Share