I've been trying to clear out the garage a bit and it seems we have a lot more sheets of corrugated cardboard lurking out there than I thought, so we got crafting with them.
I cut wide strips of the cardboard and measured them to the sizes of the kids heads, taping them in place with some left over red duct tape from the rocket ship project. The kids painted their crowns with red and pink paint and I cut out a load of hearts from the rest of the cardboard, which they painted up too. 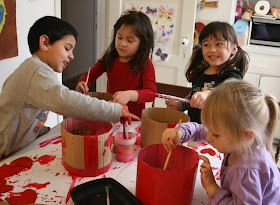 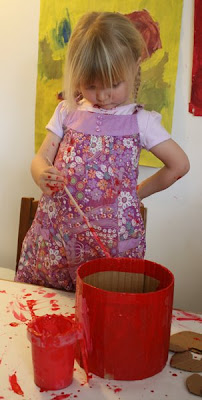 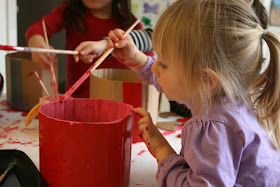 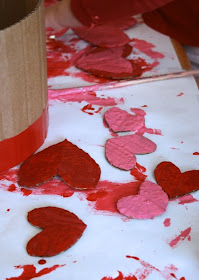 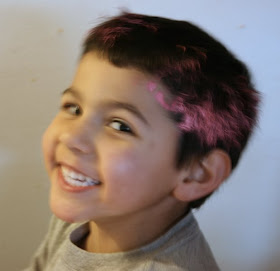 I'm sure some of you must look at all the kids and all the paint in the photos on this site and wonder how it is that it looks so calm and orderly, well, it isn't always! On this occasion, my two little filth wizards earned themselves a break from the craft table due to over excited paint flicking at each other, we had another "incident" when one of the lads tried on his crown before it had dried. All the paint washed out of everyone's hair and off my walls though, so it's all good and ready to get messed up again soon. 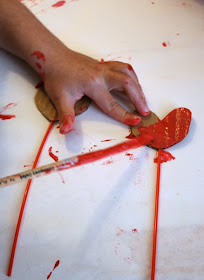 I had a load of little red plastic straws left over from making the pirate jello boats a while back. I think they are actually supposed to be disposable coffee stirrers rather than straws, but they remind me of the tiny straws you'd get back in the UK to pop through the film on the cheap cups of juice at the newsagents. The ones that were so thin that a thirsty child would pop a vein trying to suck the juice up them fast enough. Anyway, these straw/stirrers are the perfect size to fit snuggly into the spaces in the corrugated cardboard, so we could thread the hearts onto them and then stick them in the crowns without any tape of glue needed and the kids could rearrange them until they thought they looked right. I reckon you could easily use a packet of wooden kebab skewers to do the same thing if you can't find these straw thingies. 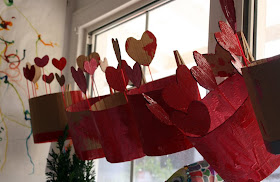 Here's a pic showing the straws threaded into the spaces in the corrugated cardboard. You have to make sure you cut the hearts so that the channels in the cardboard are running vertically, or you'll have sideways hearts on your crown. 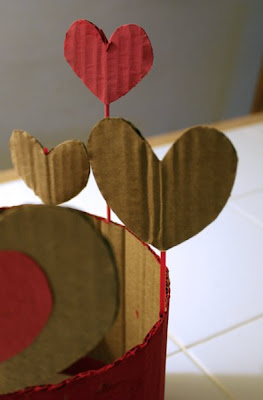 Once the crowns were dry, the little kings and queens of hearts glued hearts cut out of construction paper on the crowns too. 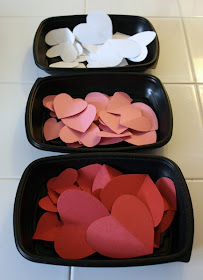 They worked out pretty well in the end, and the kids enjoyed it so much that I think I'll try doing a red white and blue version with stars on top when 4th July comes around too. I got a few pics of a few of the kids sporting their finished creations. The level of cute is rather high, especially with the urchin dirty faces they all had to go with them. 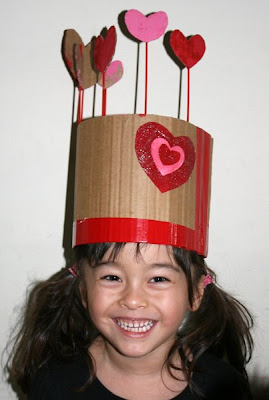 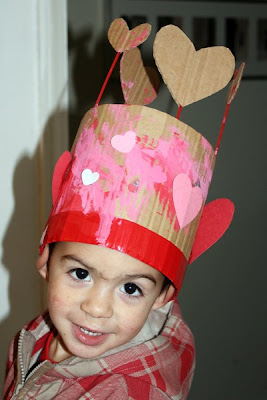 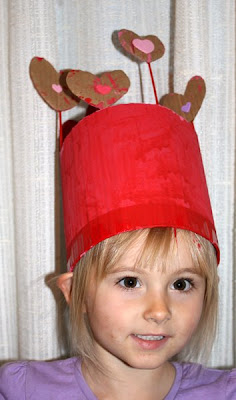 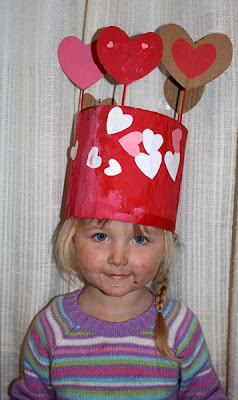