Today is my younger daughter's fourth birthday. If you've been visiting this blog for a while then you'll know that my kids, especially my youngest love fairies. We've done fairy crafts before, like making fairy houses and wings for their polly pocket dolls a while back, but for her birthday I wanted to make her something really special, but on a budget. This is our DIY version of Pixie Hollow, home of the legendary Tinkerbell. 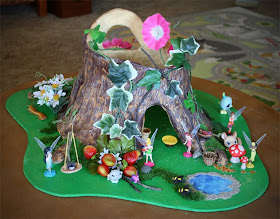 I've let my girls watch the Disney Tinkerbell movie recently, because to my surprise I found it to be the only girly Disney movie with what I considered to be a decent message.

rather than the usual Disney princess message, which seems to be:
Anyway, I decided to try and make a version of Pixie Hollow for them to have a fairy doll house inside (Fairy houses outside are of course the real deal, but the weather is sucky right now and it would be more likely to be a fairy mud pit).

I thought that salt dough would be the most indestructable material to try and sculpt a tree trunk fairy house out of, but was sure that I wouldn't be able to make it the size that I wanted unless I built some kind of underlying structure. I thought aluminium foil might work, because it's very easy to sculpt into the shape I want, and it's pretty sturdy when compressed.

Here's the aluminium structure I fashioned... 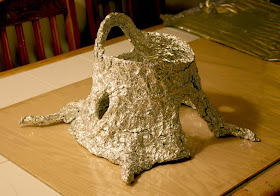 Once that was done I mixed up two batches of salt dough. You can find the recipe here (it's just salt, flour and hot water). I rolled out sections and squished them onto the foil structure to cover it completely inside and out. 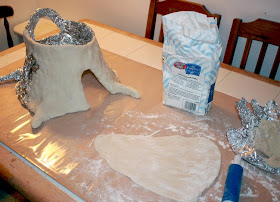 Once that was done I used a cocktail stick to make marks on the surface for a bark like texture. I made a couple of mushrooms out of the left over dough, that I was planning on painting, but I ended up making little modelling clay toadstools instead. 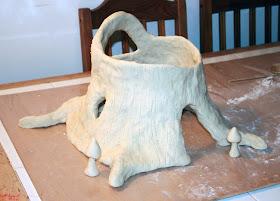 I left the salt dough monument to dry, hidden away for about a week, but it's been really damp around here (rainy season), so it wasn't fully dry and time was running out. At this point I managed to fit it in the oven to bake on a very low heat for about three hours to make sure it was bone dry before I painted it. 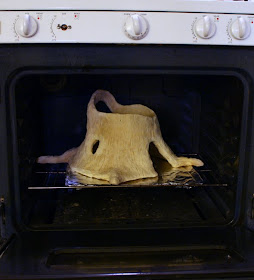 If I'd put it in the oven right away, when the dough was still fresh, then the air pockets in the aluminium foil would have expanded and broken the dough coating or blistered it and ruined it, so it was important that I let it air dry as much as possible before I put it in the oven. Even in air drying, the dough contracted and I ended up with a couple of cracks on it that I just filled with Spackle/Polyfiller.

I marked out a curvy shape on some plywood that we'd lifted from the skip round the back of the local charity shop (you know how classy I am). This was going to be the base for it all to sit on. 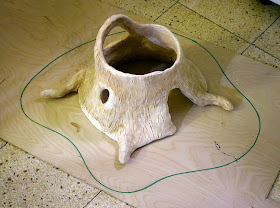 Once all that was done, I painted a base coat of light brown acrylic craft paint on the trunk. 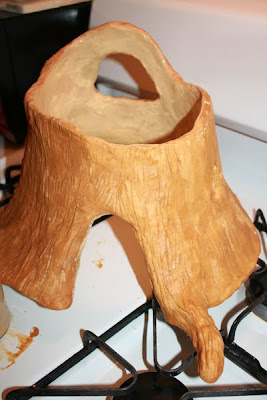 Then I used a rag to wipe on darker brown, to get a more bark like colour/texture. 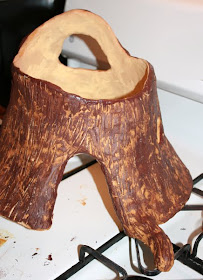 Painted up the base green and dabbed it with a rag to get rid of brush marks and make it a little bit textured. 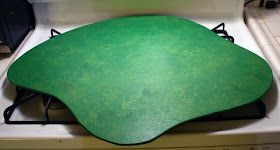 I wasn't sure how to glue the trunk to the board securely. I didn't think wood glue on it's own would do it, so me and the hubbins ended up squeezing a whole load of hot glue on the base of the trunk with a couple of glue guns. Of course by the time we had finished doing that, most of it had solidified, so I put it back in the oven upsidedown for a few minutes, until the glue had remelted, and then whipped it out, turned it over and plonked it on the board for the glue to set. Worked a treat, and luckily putting it back in the oven didn't affect the paint job. I slathered the whole thing in a coat of matt polyurethane varnish, and left it to dry overnight.

All that was left to dothe next day was decorating it. I used some plastic vines and flowers from the Dollar Tree, and a load of random stuff like twigs and pebbles from outside. I also used some fake grass stuff that had been on mini tree place settings that our friends Pat and Victoria gave us after their wedding (Is this the fourth project we've used them in? Thanks guys!). I also made a couple of little toadstools from modelling clay, and a pond surrounded by some sand glued on from our sand box.

The water from the pond was made by putting a little bit of blue acrylic paint in some of the matt varnish and pouring it into an aluminium lined yoghurt pot lid to dry with a sprinkle of glitter. Once dry I pulled it out and cut it to shape to be glued on. 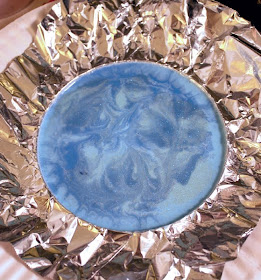 There are a lot of little things that I can keep making to add to this with the kids, like a rope ladder, a staircase, furniture for the inside, and of course it'll be fun for them to collect bits and bobs from the walks we go on to add to it as well. Pinecones, acorns etc.

Here are a load of photos of our version of Pixie Hollow, with the set of tinkerbell characters that we got to go with it (found in Target). One of our friends back home in the UK must have been on the same wavelength, because she got our daughter a couple of littlest pet shop creatures for her birthday, which go perfectly in this fairyscape! (thank you Marie!). It's been a big hit with the girls, and so far it appears to be as structurally sound as I'd hoped. Cute fairy door for it next maybe? 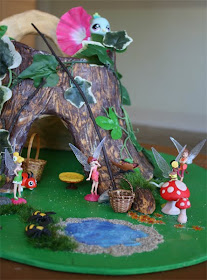 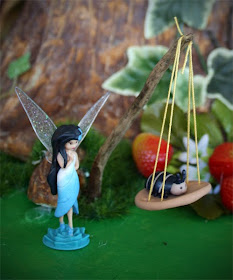 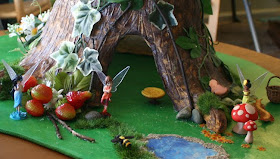 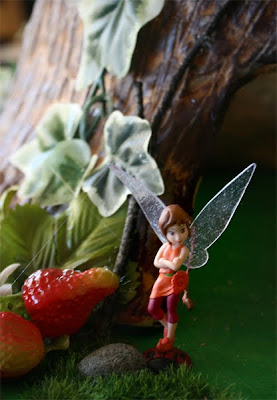 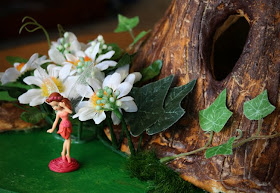 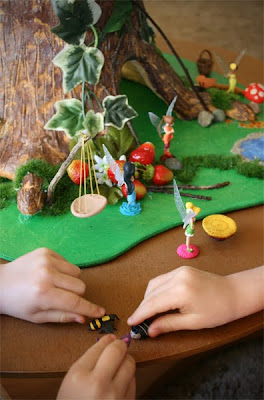 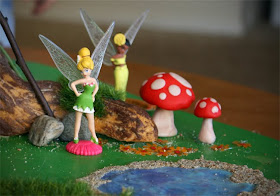 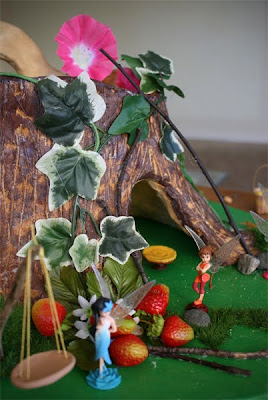 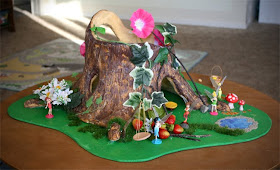 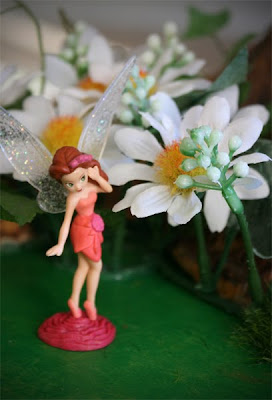 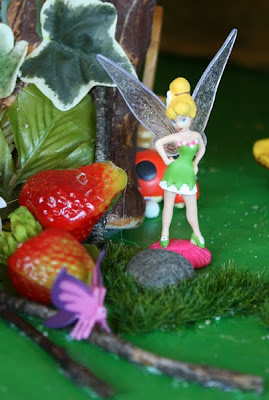 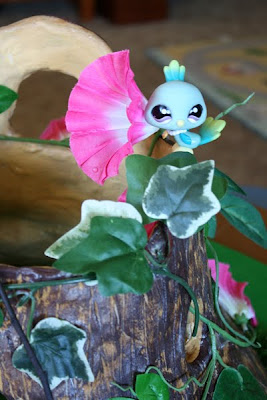 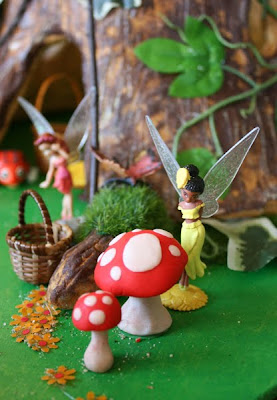