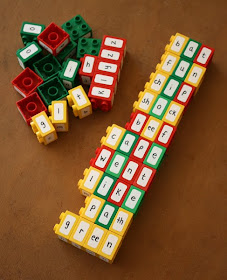 Almost a year ago I made a couple of DIY spinny spellers for my kids, because they were learning to sound out letter combinations and blend sounds to start reading. The spinny spellers you can buy are all upper case letters though, and I wanted something that was lower case, so I just used a bit of dowelling and some wooden beads and some letter stickers we had handy.

It worked a treat and I agreed with my older daughter's kindergarten teacher that it would be a good tool for the classroom, so I've got a box of wooden blocks that her husband kindly cut and drill pressed holes in, plus a bunch of dowelling and all the left over wooden beads from a thrift store find, to make over 40 of these things. I'm hoping I can get my act together and find some appropriate letraset cheaply to put letters on all the blocks and varnish them. I was going to try this method (which is very cool), but with nearly 500 surfaces altogether, that would take my until the kids were in college! 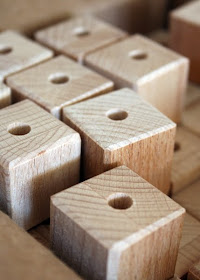 Anyway, as well as the spinny speller hackathon, I've ended up making a set of creative spelling/reading/story making blocks from our Duplo bricks. I wanted something with a bit more freedom than just the three blocks of the spinny speller. Something that could grow with the kids ability. We are lucky enough to have a good amount of Duplo because my mum saved all mine and my sisters, and we scored a couple of cool garage sale sets too, plus uncle Chris gave the kids a zoo set. Their dad stole a few of the bricks to make traffic lights for them a while back, but we still have lots we can use. 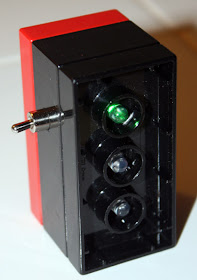 The kids are now preferring more and more to build with the smallest scale Lego, but the Duplo still has so many possibilities for them as they get older. 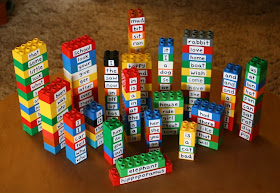 All I did was sit down one evening with a bunch of white stickers and write out a load of easy words. Sight words and words that my kids can already read or sound out. It took a while to write and cut them all, but it was very cheap, and we were lucky enough to have a mate we'd not seen in years staying with us that night, so we all sat around and chatted until about 3am while I stuck all these words on the blocks. For some of them I put the opposites on the other side of the block, like "love" and "hate" or "big" and "small" and for others I put complimentary words like "his" and "her", so that the kids could change sentances they made easily by switching around a block. I had a couple of long blocks, so used them for entertaining long words. 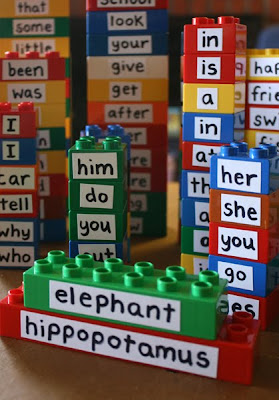 The kids have enjoyed them a lot. We started out making story walls together, and then when left to their own devices they started making funny sentances stacked up vertically. 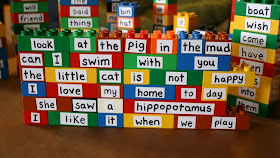 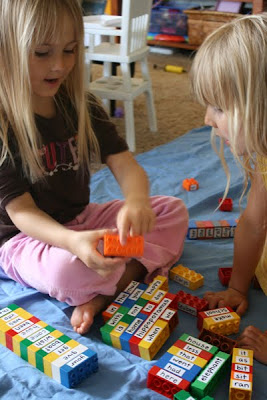 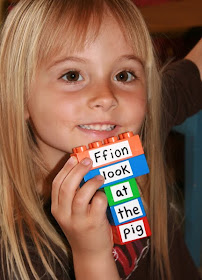 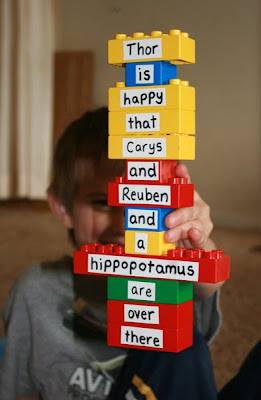 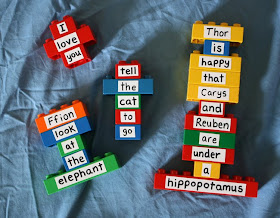 For my younger daughter, who is four, I made another set that were in a different orientation, that would work a bit more like an extension to the spinny speller. They just had vowel bricks with a different vowel on each of the four sides, and consonant bricks with four consonants on each side. I also made a few bricks that had combinations like "ch", "sh", "th" etc, because she's learning those sounds in words too. 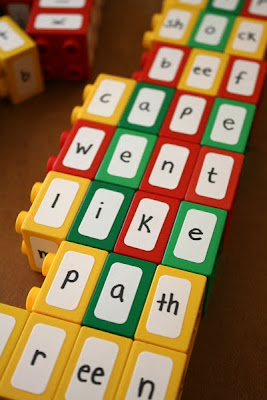 I drew a load of pictures in black sharpie that the kids wanted to colour, then they sat with the letter bricks making the words that went with each picture. 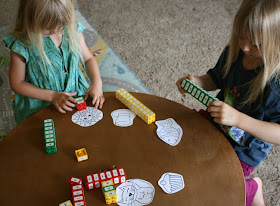 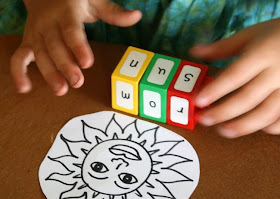 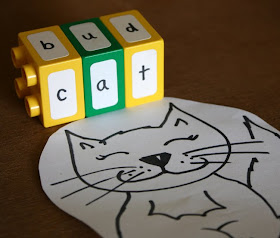 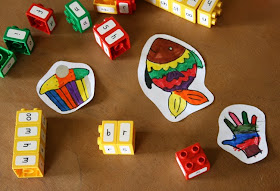 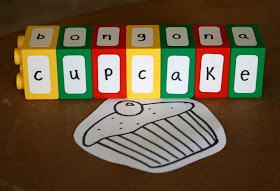 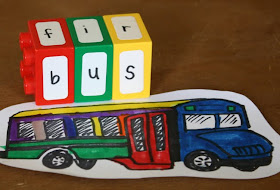 They also made words to go with pictures in books and little toys they have. 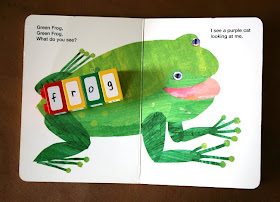 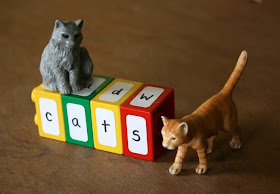 Of course the Duplo bricks can still be used in regular building play, but this adds an extra learning possibility to the play. The really seem to like the idea of "building" a word or a sentance. I really think that Lego should just make sets like this. The kids were so into building with the words and it would be great to be able to buy grade level appropriate sets or character story telling sets. Limitless!

We're still having fun with all the card and hole punching Lego crafts from a while ago too. I should get my act together to post you some new vehicle kit print outs of something else interesting from our experimenting.
Share