I saw the idea for making a kid's play mat out of a dollar store shower curtain on a blog called My Little Gems, which is written by Sharla. I came across this craft and hence her blog because it was featured on Blissful Kids. I had six kids over and it was nasty rainy, so I needed something that they could help to make and play with for most of the afternoon.
I taped out the shower curtain onto the kitchen floor with some packing tape and then set about drawing on it with a black magic marker. The kids were right there while I was setting this up, so the drawing of the village layout was done whilst they were all giving input on what buildings we needed and where and i didn't have the time to look for and print out the cool photos and logos that were used in the original shower curtain play mat I saw.

I taped two sharpies to opposite sides of an old juice bottle, so I could use the contraption to quickly draw roads that were an even width. by the time I'd drawn half the village, the
kids had already started colouring it, so we kind of worked together and around each other with some kids colouring and some telling me what i needed to draw next on the map. There's only one photo of the project half done, because I had to keep drawing to keep up with the kid's requests for more roads and buildings!
You'll notice from the image of the finished play mat towards the bottom of this post that it's a bit of a weird town plan with roads going to odd places, but that's what happens when you are crawling around on the floor inbetween six kids that are four years old and younger and being directed by them! I resisted the urge to put in a couple of roundabouts for fear of confusing the American children :D, but as one of my mates pointed out to me, by doing this I have doomed another generation of Americans to repeat Chevy Chase's European vacation mistakes. 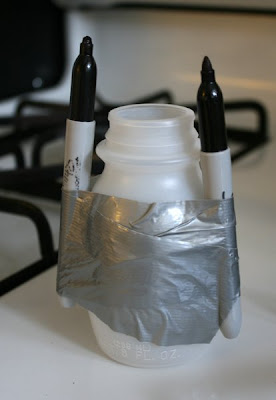 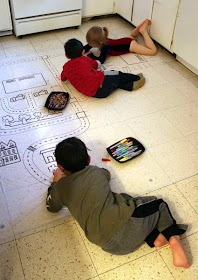 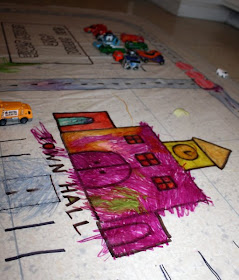 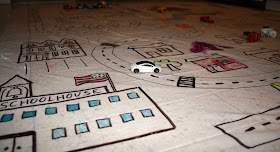 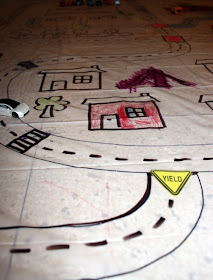 because of the texture of the shower curtain (actually the packaging said it was a shower curtain liner?) it meant that we could colour it with crayons as well as perminent marker pens. The kids spent a long time colouring and when some of them got bored of colouring, we got the cars out to go on it, while others carried on colouring. One of the two year olds decided that the gas station/ grocery store needed some stock and went to get a basket of play food to pile up on top of it. 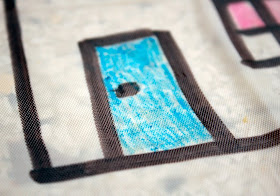 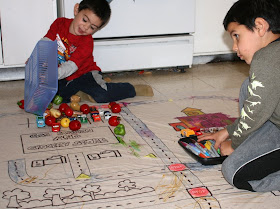 Last of all I got out a pack of traffic sign foam stickers from the dollar store and the kids kind of figured out where they should go on the roads. I left it taped to the floor overnight and my girls got up in the morning and carried on colouring it. 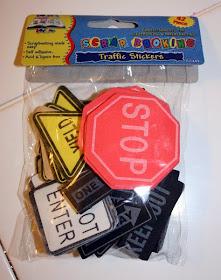 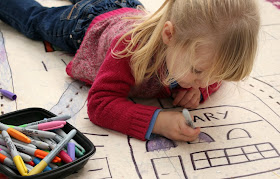 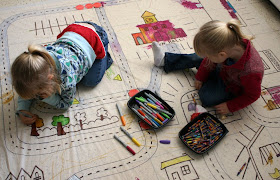 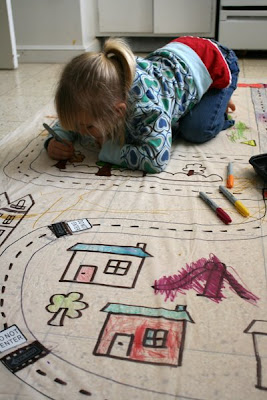 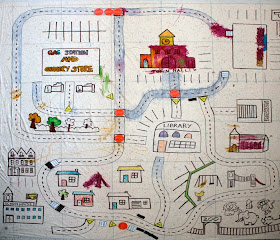 I have another shower curtain liner from the dollar store and the plan for the next floor map adventure is to spend an evening drawing a map of San francisco with all the famous landmarks on it, so the kids can colour it in and drive thier toy vehicles around all the places they know.
Maybe after we have done that I will do a map of Swindon to keep Duncan Happy ;)
Share